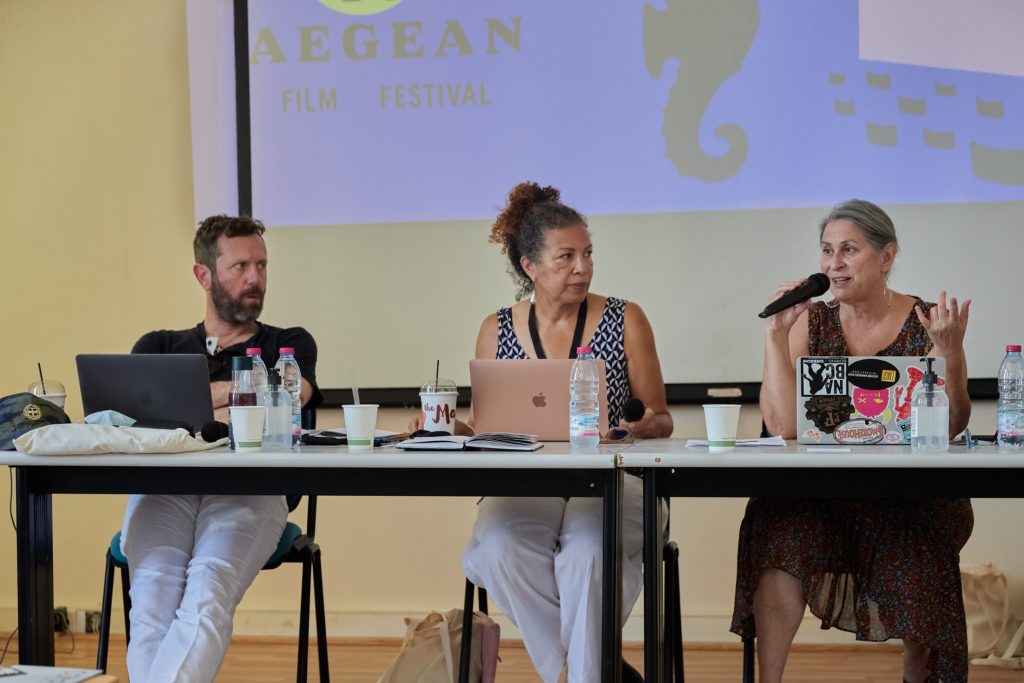 A report of the Location Management Workshop

A very successful Location Management Workshop was co-organized by the Hellenic Film Commission of the Greek Film Centre and the 10th Aegean Film Festival, within the framework of the Location Greece Conference, on July 20 and July 21, 2021 at the Anargyrios and Korgialeneio School on the island of Spetses.

The Location Management Workshop took place in collaboration with the Location Managers Guild International (LMGI).The opening of the event was greeted by the artistic director of the Aegean Film Festival, Babis Tsoutsas who noted the importance of this first Conference focusing on the parameters of attracting international productions in Greece. Following, the director of the Hellenic Film Commission of the Greek Film Centre, Venia Vergou, emphasized on the crucial role that location managers contribute to the success of productions and on the commitment of the Hellenic Film Commission to systematically give prominence to their work. Venia also noted the importance of the Location Managers Guild International, whose persistent efforts led to an equal recognition of the location management department on the imdb cast & crew listings. Then she welcomed and introduced the three Workshop Panelists, with over 20 years of experience in Hollywood productions.

During the 2-day Workshop the Panelists discussed their catalytic position in international productions in host countries, enhancing the skills of location managers in Greece to better attract and facilitate international productions. They analyzed ways of presenting locations and keeping organized libraries to be able to create immediate creative response and to convey the visual language immediately. They also explained that, since every location is an event for a location manager, their skills include being event planners, filmmakers, diplomats, trespassers, explorers, creatives, major negotiators, accountants etc. The Panelists also emphasized on the demanding process of budgeting as they need to visually process each and every single scene and mentally walk through the visuals they need. They made very clear that the work that the location managers do is a thin line between the real world and the movie world.

On the second day of the workshop, the Workshop Panelists where grateful to be accompanied by another LMGI member, Ravi Dube, a location manager with extensive career used to handling large location departments spread over continents, who is currently working in a big US production shooting in Greece. They all discussed comparative cases of audiovisual production and shared with the participants examples and experiences from their careers as location managers.

The workshop was attended by more than 25 professionals from the film industry, such as location managers, production managers and producers, who wanted to expand their contacts and their knowledge about the requirements of major international productions and co-productions in Greece.

All talks held in English and were also available digitally via live streaming on both the festival’s and the Hellenic Film Commission’s social networks. At the same time, there was an opportunity for Q&As with the participants, which created the opportunity for open dialogues and exchange of numerous opinions.

Presented by Location Managers Guild International Board members, Alison A. Taylor, Dan Connolly and JJ Levine, the Introduction to Locations will cover the basics of location scouting and management, including topics such as the anatomy of the location department, crew titles and responsibilities, workflow and the profile / skillsets needed to be successful scouts and managers. This module will also cover communication on set, as well as successful scouting strategies and techniques for overcoming obstacles while scouting and securing difficult locations.

This session is designed for location and production professionals, and anyone who has an interest in furthering their understanding of the role of the location department. The presenters will cover more advanced location scouting and management techniques, with an emphasis on the do’s and don’ts when filming an American production in Europe. The presentation will include how to manage expectations and cover the myriad of resources needed by the location department to successfully complete a large-scale project. This module will also cover safety on set (including Covid-19 protocols), digital scouting and the importance of cultural awareness.

JJ Levine, 1st vice president of LMGI, U.S.A. based, has worked on hundreds of commercials and her numerous credits include Diary of a Future President as well as Sunnyside, Gumshoe, The Mayor, What About Barb, and Future Man. Levine has recently completed additional cinematography on Marvel’s The Eternals and is currently in prep on Maya Rudolph’s unnamed Apple TV Series. She is the recipient of multiple location awards including those from COLA (California On Location) and the Location Managers Guild International and has been honored by the Mayor of Los Angeles for her work in that city. Levine is a dedicated leader in her field and is on the Motion Picture Teamsters Steering Committee. She currently serves as 1st Vice President of the board of the Location Managers Guild International (LMGI) and Chair of the LMGI Marketing and Communications Committee. She recently launched and moderates the highly successful educational Zoom series, Coffee Tuesdays with the LMGI.

Alison A. Taylor, 2nd Vice President LMGI, U.S.A. based, has had the privilege of working on many recognizable projects including Training Day, The Soloist, The First Purge, Purge: Election Year, BAPS, Southland, Insecure and many more over the course of her 25-year career as a Location Manager for film and television. She is extremely proud of her work on the just-released limited series for Amazon Studios, The Underground Railroad. Alison most recently completed work on additional photography for Marvel’s Shang Chi and the Legend of the Ten Rings. Alison has won three California on Location Awards (COLA) – voted by her peers for the excellence of her work as a Location Manager. Her awards were for her work on Southland, Straight Outta Compton and A Wrinkle in Time. She is an active member of Hollywood Teamsters Local 399, Location Managers Guild International (2nd Vice President), Behind the Scenes Mental Health and Suicide Prevention Initiative and the Alpha Gamma Omega chapter of Alpha Kappa Alpha Sorority Incorporated.

Dan Connolly, Board member LMGI, UK based, has worked in locations over 23 years, starting at the very bottom as a runner. An active Location Manager for 20 of those years, he works across formats in television, features, and commercials. Credits include: Transformers: The Last Knight, Morbius, Devs, War Machine and Phantom Thread. He also worked as an in-house LM and advisor for the Abu Dhabi Film Commission during a boom period for that region (Fast and Furious 7, Star Wars). A member of the UK Film & Broadcast Union (BECTU) as a Location Branch Committee Member, recently elected as an LMGI Board Member, Connolly is an active member on the LMGI Coffee Tuesdays committee, and looks forward to what the next 20 years hold in the Location Department and is dedicated to promoting excellence on location.