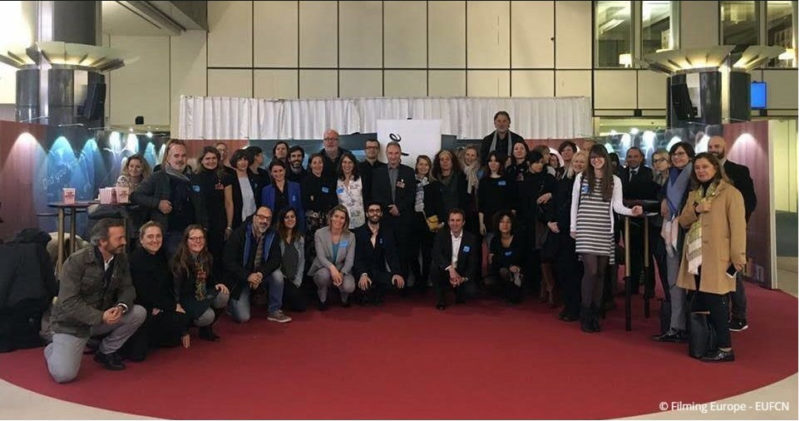 EUFCN is celebrating its 10th Anniversary this year: the Association organized a week of events in November in Brussels (Tuesday 7th to Thursday 9th), inside and in collaboration with the European Parliament. The full celebration received the European Parliament Patronage. The 10th Anniversary Event was conceived to offer members the chance to present themselves to political and institutional partners, in an official and unanimous way: this occasion represented an important opportunity to give visibility to the Association and to highlight the meaningful role played by Film Commissions and Regional Film Funds in the audiovisual industry.

The event – structured in four main parts – gave its members the chance to get local institutions involved and offer them an exceptional chance of visibility.

The opening ceremony was celebrated on Tuesday 7th, together with the European Film Location Ceremony Award; this was the first edition of a contest organized by EUFCN in collaboration with Cineuropa, to award the most beautiful film location in Europe. The City of Görlitz, from Wes Anderson’s film The Grand Budapest Hotel, has been chosen by the online voters as the Best European Film Location, while Antiparos island, from Argyris Papadimitropoulos’ film Suntan, proposed by the Hellenic Film Commission, was second in the voters’ preference during the entire contest.

From Tuesday 7th to Friday 9th, EUFCN was a protagonist of the special exhibition “10 Years of Filming Europe”. The exhibition inside the EU Parliament was sponsored by the Italian MEP Sergio Cofferati. It aimed at recreating the experience that viewers can live inside the movie theatre and offered them a very unique show: the viewer was carried directly inside the production process of a movie, to understand the meaningful role played by film commissions during the full movie’s realization.

On Wednesday 8th, EUFCN organized a conference to present the Network and its mission in front of the MEPs. The conference was concentrated on film commissions’ work, with a special focus on Film Tourism and the Economic Impact on the Creative Industries, presented in their key points by the experts Stefan Roesch and Jonathan Olsberg, respectively.

On Thursday 9th the event closed with special training sessions, reserved to EUFCN members. The main topics was Green Filming and Film Tourism.

In its first decade our Association has grown exponentially, reaching a dimension that was unthinkable only a few years ago. ”This is the enthusiastic comment of Truls Kontny, President of EUFCN, who wants to underline that “thanks to the active participation and involvement of each member, the EUFCN has been able to increase its presence in the most important International film festivals and trade shows, to raise its visibility in front of the European institutions and to create several networking events with audiovisual professionals and the industry. The Board and I, we do believe that the 10th Anniversary Events will represent a great goal in order to show the development potential of our Network.”