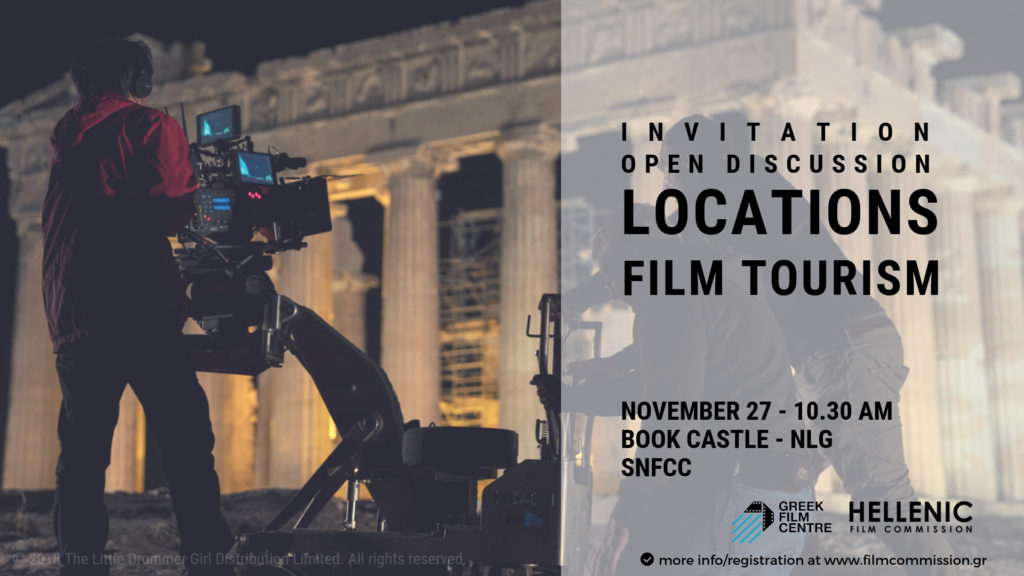 The Hellenic Film Commission of the Greek Film Centre, responsible for promoting Greece abroad as well as attracting and supporting international audiovisual productions when filming in Greece, invites the public to participate in an Open Discussion on “Location & Film Tourism” at the Stavros Niarchos Foundation Cultural Center (SNFCC), in the Book Castle of the National Library of Greece, on 27 November 2018 (doors open at 10.30am).

The open discussion consists of two panels. The first panel will focus on “Locations – The importance of location management in an emerging film destination” with Yorgo Stathopoulos, Location Manager (THE TWO FACES OF JANUARY, BROKEN FLOWERS), and Tate Aráez Guzmán, Supervisor Location Manager for GAME OF THRONES in Spain.

The second panel will focus on “Film Tourism – The synergy between tourism and audiovisual productions” with Stefan Roesch, expert in film tourism with many years of collaboration with VisitBritain, Czech Tourism, Association of Film Commissioners International (AFCI), Film London.

The aim of the Open Discussion is to highlight the multifunctional role and the extremely important contribution of the Location Managers in the international audiovisual productions, as well as to present the possibilities of promotion and development offered by Film Tourism.

The discussion will be moderated by Venia Vergou, Director of the Hellenic Film Commission. The event is open to film professionals, public bodies and authorities responsible for filming permits, journalists and film and tourism students.
The discussion will be held in English with simultaneous interpretation into Greek.

Pre-registration is required by 26 November 2018 here (13.00). A pdf version of the programme is available here. Panelist bios here.

The entrance is free and on a first come -first served basis.