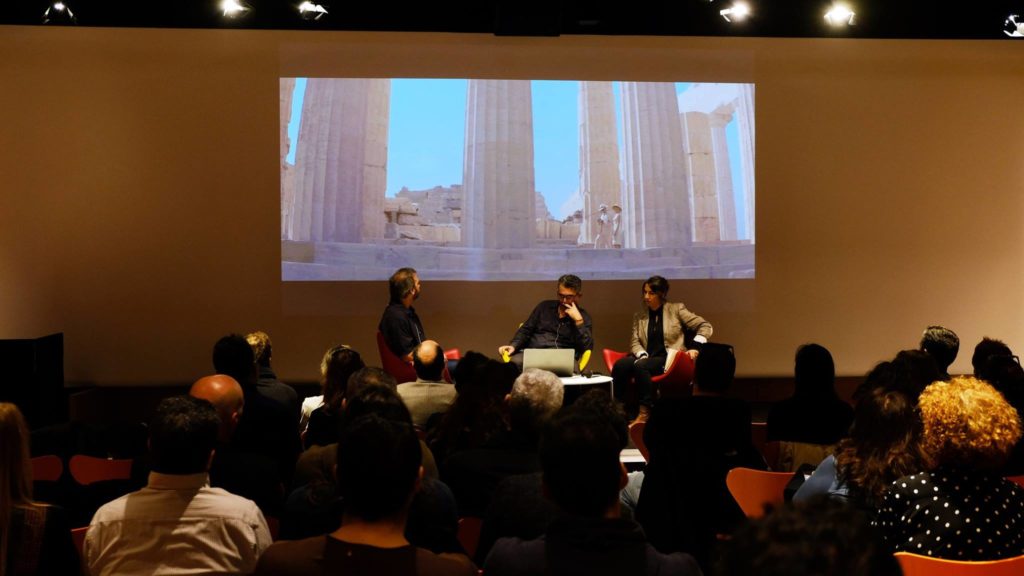 From Location Managers to Film Tourism

A very successful Open Discussion was organized by the Hellenic Film Commission (HFC) of the Greek Film Centre (GFC), the body responsible for attracting and facilitating audiovisual productions in Greece on “Locations & Film Tourism” on Tuesday 27 November 2018 at the Book Castle of the National Library of Greece, at the Stavros Niarchos Foundation Cultural Center.

The opening of the event was greeted by GFC General Director Vassilis Kosmopoulos, who noted that: “The Greek Film Centre, apart from funding and promoting the national film production, has set among its strategic priorities the development of activities of the Hellenic Film Commission, which may have a multiplying and multidimensional effect to the country in a broader way, from attracting international audiovisual productions to film tourism”.

The first panel on “Locations – The importance of location management in an emerging film destination”, featured Yorgo Stathopoulos, Location Manager with extensive experience in the United States (THE TWO FACES OF JANUARY, BROKEN FLOWERS), and Tate Aráez Guzmán, Head Location Manager for GAME OF THRONES in Spain. Both speakers analysed the range of responsibilities, duties and tasks undertaken by each and everyone of the entire Location Department Crew Positions (Location Manager, Assistant Location Manager, Location Department Coordinator, Location Scout, Location Assistant) through their personal experiences in working for international productions. The crucial role of Location Managers, the variety of their tasks and their skills (crisis management skill included) -from scouting, sometimes without access to the script due to confidentiality, to finding locations representing other countries -were the main themes addressed in the presentations of the two guest speakers.

Moreover, the issue of securing filming permits for archaeological sites and more broadly historical places in the international context was addressed during the discussion with the audience, as were the timing and process of response from responsible public bodies, fees and pricing policy for use of sites during filming and subsequent broadcast and, finally, securing locations and opportunities for intervention in the cultural and natural environment during filming, in a way that is beneficial and ensures sustainable development. The multi-faceted way in which big-budget international audiovisual productions approach the countries in which they want to invest for filming (film commissions, financial incentives, facilitation, local film industry, labour costs, etc.) was also addressed. It was noted that cash rebates are among the most significant incentives for attracting international productions, while their promotion is of paramount importance for local Film Commissions. “Letting producers know about incentives is an important activity for Film Commissions. The Spanish experience shows that the operation of many Film Commissions all over Spain over the last twenty years has increased significantly the number of international productions in the country which was, subsequently enhanced by the tax rebate established three years ago”, Tate Aráez Guzmán said.

Greece offers many opportunities for attracting international audiovisual productions, not only for its archaeological sites and islands, but also for its rich natural and urban lanscapes. “You don’t need to come to Greece in order to film in Greece. There are talented and organized film crews here, with many opportunities to evolve. It’s a chain reaction. Great demand will create a new supply of filming opportunities”, Yorgo Stathopoulos noted.

The first panel was concluded following an intervention regarding the Greek situation by Venia Vergou, Director of the Hellenic Film Commission. One of the points she made was that: “it is essential to, on the one hand, create a new, stable, and rational institutional framework for licensing and fees, which will meet contemporary needs and, on the other hand, to ensure that institutional partners cooperate effectively. The Hellenic Film Commission of the Greek Film Centre has submitted its proposals addressing institutional issues to the responsible directorates of the Ministry of Culture, which respect both the unique cultural heritage of the country, as well as the opportunities for using it to its full potential through audiovisual productions, towards the goal of more broadly developing the film industry in Greece”.

The second panel, “Film Tourism – The synergy between tourism and audiovisual productions”, featured Stefan Roesch, expert in film tourism with many years of collaboration with VisitBritain, Czech Tourism, Association of Film Commissioners International (AFCI), and Film London among others. Stefan Roesch analysed the multidimensional relationship between film and tourism, using examples from his work in Ireland (GAME OF THRONES), Great Britain (PADDINGTON), NEW ZELAND (LORD OF THE RINGS) and Denmark (TROLLS). He spoke about securing license for use of promotional materials of audiovisual works, and the opportunities of using excerpts from films for promoting locations in different countries, as well asthe creation of tourist packages. “The creative combination of storytelling in film with reality is the key in film tourism. Many productions are filmed in every country, but that does not mean they are all suited to the creation of a tourist package”, he noted during his talk.

The presentation focused on three strategic points utilised by film tourism: filming locations, the creation of services and activities offering visitors the opportunity for cinematic experiences, and the promotion of the history and authentic experiences of local people who participated in the filming of foreign productions. At the same time, the presentation highlighted that film tourism can serve as an alternative network for the promotion and distribution of film productions. Examples from many film tourism destinations were presented, which use special techniques to attract visitors, such as signposting locations with information signs, film museums and theme parks, the use of (parts of) film sets on location, specialised tours, the recreation of key scenes of films through pictures on the actual locations, the development of activities and events related to film, etc. Moreover, the importance of placing emphasis on different audience groups was highlighted in relation to strategic planning for attracting visitors, ranging from enthusiastic fans to those less interested, thereby bridging the gap in interest through familiarising them with the overall experience of filming.

Closing the event, Venia Vergou concluded that “today’s event was a priority for the Hellenic Film Commission from the start in order to give visibility for the first time ever to creative professifals the choices of whom play a crucial role into attracting foreign audiovisual productions and learn from their expertise, knowledge and good practices”. Finally, she reminded audiences that they can vote for Corfu, the location of the popular British series THE DURRELLS, submitted by the Hellenic Film Commission to the competition of the European Film Commission Network, for the European Film Location Award 2018. The competition takes place online through the cineuropa.org platform, and runs until 30 November.

The discussion was attended by over 150 attendees, the majority of whom were film professionals (primarily producers and location managers), as well as representatives from the Ministry of Tourism, the GNTO, the Region of Attica, the Municipality of Athens, EKOME, but also travel agents, journalists, and students from the broader audiovisual sector.

One of the strategic goals of the Greek Film Centre is the organization of activities, which can be educational, facilitate dialogue and exchange of expertise between institutional and other partners, as well as provide networking opportunities for the local and international film industries.