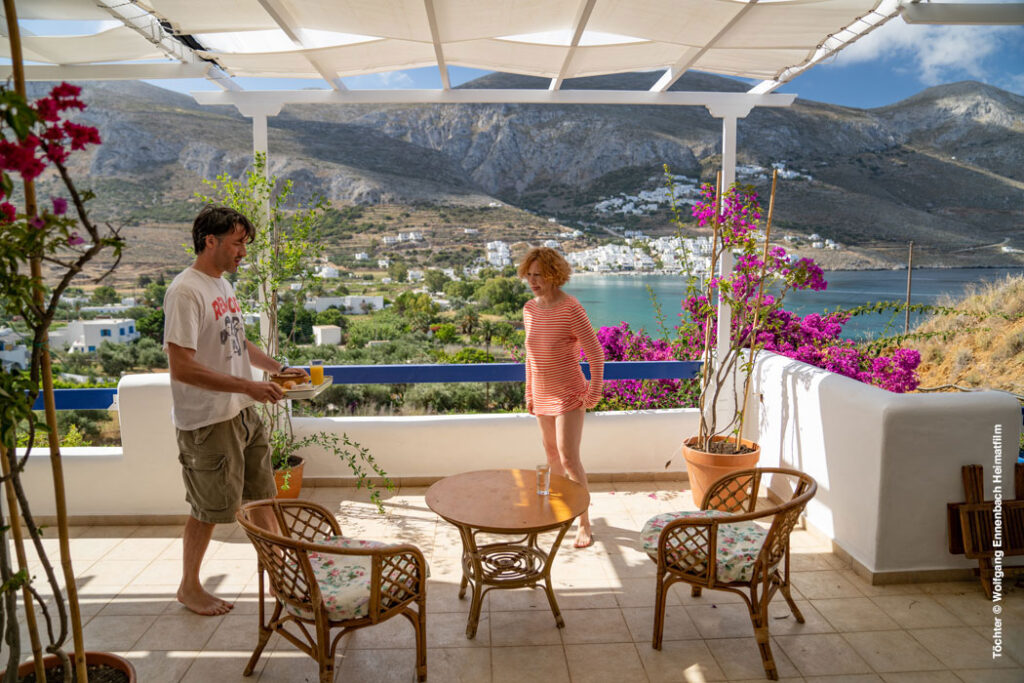 Daughters: The Firts European Co-production to Start Filming in Greece after the Pandemic

This is what happens when Heimatfilm Köln (Germany), Heretic (Greece) and Similar (Italy) join forces and land in Amorgos island for shooting “Daughters”, the first european co-production to start filming after the lockdown in Greece.

Thirty-two years after Luc Besson made the iconic film Le Grand Bleu on the island of Amorgos, one of the Cycladic Greek islands, the second international film to be shooting there, Daughters, a German-Italian-Greek co-production is the first European co-production to re-start filming in Europe and the first to be shooting in Greece after the pandemic.

The film is produced by Heimatfilm (Germany), Heretic (Greece), Similar (Italy), with Warner Bros being the theatrical, TV and VOD rights holder in Germany.

Filming in Greece took place between June 22 and July 10

A film of 5million € total budget, with 25%-30% to be spent in Greece, saw the initial cost raising up by an estimated 25 % because of cancellations, postponement and COVID measures.

Based on the novel “Daughters” by Lucy Fricke, a best-seller in Germany, the film (Töchter, original title) is about two women, Betty and Martha, going on a road trip with a dying father in the back seat -whose only wish seems to be an assisted suicide in a swiss special institute -and their efforts to come to terms with absent father figures. A touching story of two friends with an amusing undertone.

During last week of filming in Greece, we headed to Amorgos to see how the breathtaking locations of Amorgos were perceived by a new European co-production which had to solve the puzzle of rescheduling shootings in three different countries and how the new reality of COVID had affected the Greek-German crew on location. The Hellenic Film Commission talked to German producer Bettina Brokemper and director Nana Neul.

“Amorgos is a COVID-free island and during the first three weeks of shootings our cast and crew where the only residents in the hotel, Laki Village, at Aegiale bay. Shooting at a well-protected environment and having our unit base in walking distance from some of the shooting locations gives extra value to the entire shooting experience. We were told by the Mayor’s office, who’s been very supportive, that we are the nicest big crowd the island ever had. We do not want to show a stereotypical Greek island but to show Amorgos the way it really is”, proudly says German producer Bettina Brokemper of Heimatfilm. Revisiting Amorgos three decades after Luc Besson turned the island a favorite destination worldwide overnight with Le Grand Bleu, “can only be seen as a good sign. I found the novel wonderful and I agreed with Nana to make it into a film. As far as I know part of the book was written here in Amorgos and after reading it, I thought Amorgos would be the only place to shoot the film. I’ve been a big fan of Greece for vacation and now I am a big fan of the country for filming, as well”, Bettina explains.

Locations for Daughters include Aegiale bay and its harbor, the stone village Asfontilitis, Chora, road trips and boat trips to the small island Nikouria overlooking Amorgos.

“We try not to just show nice views but to catch the soul of this island, its wilderness and roughness. It is very important to us and for the film. This is a comictragic film and I think we found a good balance as nice views are contradictory to what’s happening in some scenes. We are in love with Greece. Sometimes it feels like shooting in paradise. Our Greek actors are also wonderful. I couldn’t imagine the depth of character they’re building even in small roles. I’m so happy to work with them. They are so important for the film. We’d love to work with all of them again”, tells us Nana Neul, director of the film and co-writer of the script with Lucy Fricke, during her lunch break between takes of a scene at the taverna Argo in Aegiale bay.

Initially scheduled to start filming in Greece in April, the production had to reschedule due to the pandemic. “On the first day of shoot I was feeling as if I was letting go a weight of 2 million pounds off my shoulders. Finally, we were the first European co-production to re-start filming in Greece”, Bettina Brokemper explains. “The idea was to start shooting in Germany, then go to Italy and then come to Greece, following the development of the film’s characters during their journey chronologically. However, we were forced to stop after nine days of shooting in Germany because of COVID. And this came after being a jury member in Berlinale, a wonderful experience. I came out of a bubble of happiness into misery. Because you couldn’t even make a plan. I hate it if plans don’t work but not being able to make plans at all is much worse. A lot of money was lost because of contracts being cancelled when we were forced to stop. Since shootings in Greece were postponed in April, we’ve been constantly talking with Heretic, our co-producers in Greece, about rescheduling, protocols, extra costs etc. For a long time, we didn’t know when travelling would be allowed, we had to see how COVID would develop. We’ve been exchanging notes on which country was the first to have protocols, if we knew anybody who had started filming etc. Then we analyzed the script to see what we could still do or not and made some changes, for example we moved some indoor scenes to balconies etc. Heretic has done a wonderful job. Organizing arrivals for cast and crew from Germany, Italy and Athens to a Cycladic island was a challenge. However, the island of Amorgos has welcomed us very warmly and the Greek crew is wonderful. Of course, we’ve taken all necessary measures: we were all in quarantine between 15th June until 22nd June, ventilating interior spaces frequently, keeping distances, offering 5 masks/person on a daily basis, more rooms in accommodation, additional drivers, hygienic manager, all cast and crew members being tested regularly, packaged food at lunch breaks etc. I am a strong believer in green filming, I’ve produced a lot of green films. I have saved so much plastic in my life and now having to do the opposite with all this necessary packaging is upsetting.

Collaborating with Heretic seemed the best way for Heimatfilm, as Bettina explains: “I’ve known Konstantinos Kontovrakis (producer, co-founder of Heretic) since before he turned into producer, when he was working at the Thessaloniki Film Festival and we had this joke between us about working on a project together one day. In co-productions it is very important to understand each other. And there has always been understanding between us and Heretic”.