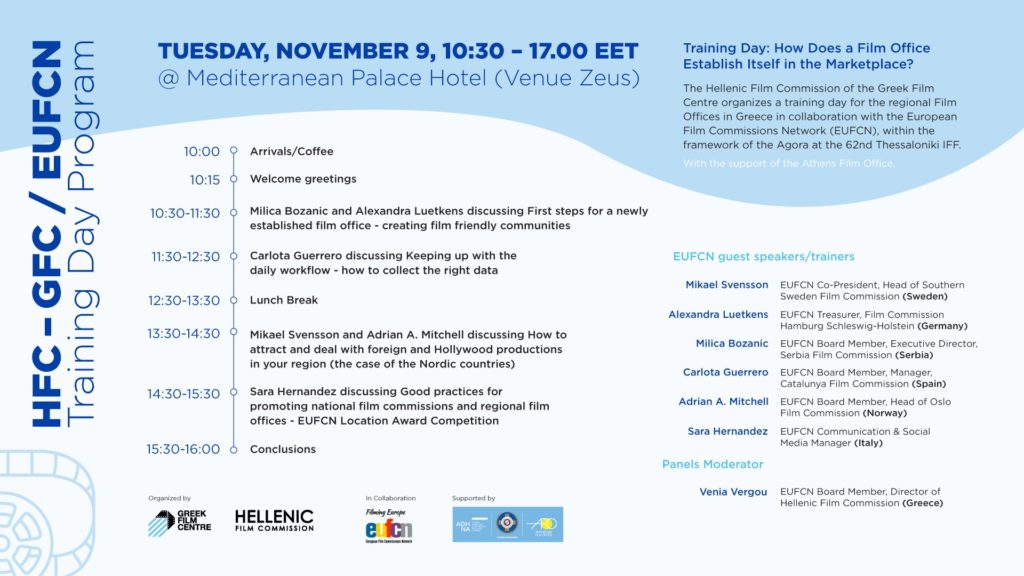 Training Day: How does a film office establishes itself in the marketplace?

The Hellenic Film Commission of the Greek Film Centre organizes a training day entitled “How does a film office establishes itself in the marketplace?”, in collaboration with the European Film Commissions Network (EUFCN) within the framework of the Market of the 62nd Thessaloniki International Film Festival on Tuesday 9 November 2021. With the support of the Athens Film Office.

The aim of the training day is to provide training and networking to the film officers and the executives of the regional Film Offices operating in Greece. During the training day, members of the Board of the European Film Commission Network (EUFCN), from the Czech Republic, Sweden, Germany, Spain, Norway, Serbia and Italy, will develop topics of key importance, both for the initial development stage and for the business planning of the Film Offices (good practices for attracting and facilitating demanding audiovisual works, as well as for promoting regions and territories). The purpose of the training day is that the expertise and know-how shared by the most experienced European film commissioners will work for the benefit of the Greek film officers in terms of knowledge and networking opportunities for collaborations.

Alexandra started her career in film production in the early nineties, first in the art department and then changing to the camera department, working as 1st AC and Camera Operator for several years before taking a chance with a position in the Film Commission of the (then) Hamburg Film Fund 1999.  She has been a film commissioner for almost 22 years now, developing the film commission’s services and building up Hamburg’s reputation as a filmfriendly city. From the beginning the Hamburg Film Commission held a vital role in the structure of the German Film Commissions network. Since the Hamburg film fund was fused with the fund of the federal state Schleswig-Holstein in 2007 the film commission represents two German federal states.
Alexandra was also involved in the constitutional meeting of the European Film Commissions Nework EUFCN in Berlin 2005. The Film Conmmission Hamburg Schleswig-Holstein has been a member since the official registration of the association in 2007 and Alexandra currently serves in the EUFCN board of directors as the treasurer.

Adrian A. Mitchell has a long track record from the film industry, ranging from production manager, location scout and manager, distribution and as producer. He has also done startup in educational gaming, has run a brewery and owns a bar. This might reflect his fondness of social realtions.
Mr. Mitchell is currently Head of The Oslo Film Commission. Oslo Film Commission is a part of The Vice Mayor’s office in The City of Oslo.

Sara Inés Hernandez, Italian-Mexican, graduated from the University of Portland with a Bachelor’s degree in Mathematics. She then attended Scuola Holden in Turin, where she explored lots of narrative pathways and forms of writing, with a focus on screenwriting and film production. She worked as assistant producer for Redibis Film (Turin) from 2018 until 2020. In January of 2020 she joined the EUFCN staff as Communication and Social Media Manager, to promote and support the work of more than 90 European film commission members. She manages the EUFCN Location Award, the annual prize for best European filming location.

Access will be allowed only to those who are fully vaccinated.

The event is addressed to the people in charge of the Film Offices in the municipalities and regions of Greece. It is also open to producers, accredited by Agora, on a first-come-first-served basis.